Growing up in San Antonio, Texas most of classmates in middle school looked like me; they had brown skin and black hair. I heard Spanish being spoken almost every day at the grocery store, the playground, and of course, at home. I saw more Mexican restaurants than I did McDonald’s around town. My Mexican culture was all around me. But not once in my 6-12th grade education did I read a book that was written by a Latina author or that had Latinx characters or stories about someone like me.

I am not even talking about a book that had a Mexican immigrant girl who ends up finding out she is undocumented and despite the challenges her immigration status brings, fulfills her dream of going to college. I am talking about a book that had any Latinx characters. If such books existed, I did not know. Looking back, I now recognize the damage that not seeing my experiences reflected in the pages of the books I read had on my upbringing.

First, it made me feel lonely. I knew I couldn’t be the only undocumented student in America who feared being separated from her parents, but it was not something I could discuss with my classmates, teachers, or friends. Secondly, I believed my experiences were not important. I thought that if not a single book spoke about someone like me, it must be because no one cares enough to write stories like mine. And lastly, the lack of stories like mine robbed my classmates from learning, relating, and empathizing with experiences outside their immediate world. Someone Like Me is ultimately about our human desire to belong, whether it’s in a new school, a new city, or as was my case, in a new country.

Today, according to U.S. Department of Education projections, almost a quarter of all public school students are Latinx. Yet, the Cooperative Children’s Book Center reported that in 2017, only 6% of children’s books had Latinx characters, and only 2% were written or illustrated by Latinx authors. My story is not the story of every Latino student, or of every immigrant, or of every undocumented child. But it is a story worth telling and worth reading.

I wrote My (Underground) American Dream in 2016 to shed a light on who undocumented people are, why we are here, and to show that we are people with dreams and ambitions just like everyone else. As I traveled around the country people from all walks of life would tell me they wanted to buy the book for their sons or daughters, and while young readers can certainly read my adult memoir, I knew I wanted to write my story specifically for younger readers.

Someone Like Me: How One Undocumented Girl Fought for her American Dream was published in 2018 and I have now visited dozens of schools and met hundreds of students who tell me that my book has helped them to feel seen. I’ve received notes from young readers that read, “My mom is undocumented and I used to be ashamed, but now I feel proud,” and “I am so sorry you missed your mom so much. I miss my mom when she is deployed too.”

Those young people who identify with my story deserve to see themselves in the pages of the books they read. They deserve to know that their stories are so important that books are written about them. They deserve to know they are not alone. I wrote Someone Like Me so that Latinx, immigrants, and young readers who have ever felt like outsiders can feel seen, understood, and loved. 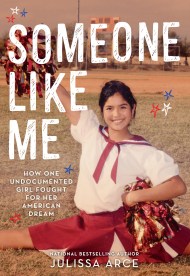 A remarkable true story from social justice advocate and national bestselling author Julissa Arce about her journey to belong in America while growing up undocumented in Texas.

Born in the picturesque town of Taxco, Mexico, Julissa Arce was left behind for months at a time with her two sisters, a nanny, and her grandma while her parents worked tirelessly in America in hopes of building a home and providing a better life for their children. That is, until her parents brought Julissa to Texas to live with them. From then on, Julissa secretly lived as an undocumented immigrant, went on to become a scholarship winner and an honors college graduate, and climbed the ladder to become a vice president at Goldman Sachs.

This moving, at times heartbreaking, but always inspiring story will show young readers that anything is possible. Julissa's story provides a deep look into the little-understood world of a new generation of undocumented immigrants in the United States today--kids who live next door, sit next to you in class, or may even be one of your best friends.