When Little, Brown acquired my book dummy Omu’s Stew, my editor Andrea said that we needed to change the name. “The double oo’s don’t flow nicely,” she explained to me. I verbally agreed, but I wasn’t entirely convinced. Even after we mutually decided on Thank You, Omu! I still wasn’t sure, and as I collaged spreads I debated between Omu’s Feast and Omu’s Magic. Today, as my book is on shelves, I can say with certainty that Thank You, Omu! is the right title. However for me, it didn’t come down to double oo’s. Instead, it’s because Thank You, Omu! isn’t about stew at all.

Looking back, this is why I insisted on not including a stew recipe. I thought long and hard about it, and even began to draft one, but I decided it didn’t make sense to include it. A recipe should be able to be replicated, but as my mother and I joke often, you’ll never cook or taste the same stew twice. My grandmother’s stew is a thick, spicy stew that is cooked down for hours. My aunt’s stew is thin, mild, quick to make, yet still delicious. The only thing the differing styles share is a tomato base and a red color. Like people, every stew has its own personality, and each stew is an experience that is vivid and distinct in its own right. And like a person, you can’t write that down.

Still, while Thank You, Omu! is not about stew, “thick red stew” is a main character and making it is not easy. Though the Omu in the book puts her stew on simmer and goes into another room, stew in reality has to be constantly attended to. Not only do you need to stir every couple of minutes, but there are onions to chop, meats and leafy greens to add, and countless seasonings to sprinkle in. Traditional stew takes both time and skill. Therefore, when Omu opens the pot in the end and sees it empty she’s devastated. Yes, that big fat pot of thick red stew was destined to be the best dinner she ever had, and Omu is sad it’s gone, but the process also took an inordinate amount of time.

Nevertheless despite all her effort, Omu never hesitates to share with her neighbors. Giving can be a sacrifice of time and talent, but it doesn’t have to be complicated. While the neighborhood brings every intricate dish you can imagine, it is the little boy’s simple letter that shares the same collage paper as Omu’s stew. The stew and the thank you letter are equal in value. While having a delicious stew was the dinner Omu expected, the thank you letter the little boy presents her with is what she truly wanted. The countless hours she spent making the stew were worth that one note. I’ve come to cherish the name Thank You, Omu! because at the heart that’s what this book is. It’s a thank you. Like the little boy, I’ve written my own thank you letter. Not simply to my grandmother, but to everyone who has given me love, encouragement, and support. What my community, what my grandmother taught me is that life is more than what you can get. It’s about what you can give.

I’ve always thought of collage as a conversation. You talk to the work, and the work talks back to you. You can craft things with all the intention you desire, but in the end like stew, the work decides what it wants to be. While I stubbornly believed Omu’s Stew was the right name, today, at the end of this journey, I am glad I listened back. And I’m still listening. Every time someone tells me about their own cherished loved one and the meals they bought or cooked and shared with them, my story grows and changes. While my senior project Omu’s Stew was about a popular Nigerian dish, my book Thank You, Omu! is a reflection on food’s magical ability to bring us all together. 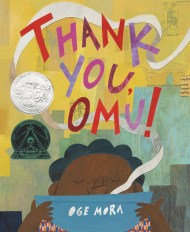 In this Caldecott Honor winner perfect for the Thanksgiving season and for fans of Last Stop on Market Street, a generous woman is rewarded by her community. A Spanish edition, ¡Gracias, Omu!, is also available for purchase.

Everyone in the neighborhood dreams of a taste of Omu's delicious stew! One by one, they follow their noses toward the scrumptious scent. And one by one, Omu offers a portion of her meal. Soon the pot is empty. Has she been so generous that she has nothing left for herself?

Debut author-illustrator Oge Mora brings to life a heartwarming story of sharing and community in colorful cut-paper designs as luscious as Omu's stew, with an extra serving of love. An author's note explains that "Omu" (pronounced AH-moo) means "queen" in the Igbo language of her parents, but growing up, she used it to mean "Grandma." This book was inspired by the strong female role models in Oge Mora's life.