On the Retelling of Myths and the Weaving of Tales

In one of the later chapters of Spindlefish and Stars, readers (as well as the characters themselves) witness a story, a myth, being told again and again over the centuries. Each time the story is told, it’s for a slightly different reason. Some tell it for the adventure. Others for a moral lesson. Some tell it because it reveals something about the love between a parent and child. Others because it reveals something about the nature of grief.

Cicero tells us that myths “[enshrine] a decidedly clever scientific theory,”[1] and, in truth, common wisdom has often suggested that myths arose to explain what science had not yet made clear. And yet, we’ve returned to these ancient tales again and again…long after science has clarified the mysteries, for example, of seasons and storms and sunlight. Even when we think we aren’t retelling myths, we often are. In her brilliant essay “How Basic is Shazam?” Jane Yolen notes that “Stories lean on stories, cultures on cultures.”[2] She sees, for example, Prometheus and Anansi in Robin Hood and Spiderman; Atlas and Hercules in Paul Bunyan and the Hulk.[3] Why do we cling to myth, even when science has explained away the mysterious? Why do we retell these tales even when we mean to tell another?

Ursula Leguin suggests in “Myth and Archetype in Science Fiction” that the writer who draws “on his own thoughts and own deep being, will inevitably hit upon common material. The more original the work, the more imperiously recognizable it will be.”[4] Nobody, she concludes, “can invent an archetype by taking thought” for we all have “the same dragons in our psyche.”[5] In other words, we return to these myths not because they represent what is mysterious about the phenomenal world, but rather because they represent—at essence—what is mysterious about us, about our own humanity. When we look to the myth of Daedalus and Icarus, for instance, it’s not because we wish to explain why the partridge always flies close to the ground: it’s not the myth’s etiological function that has stayed with us. Instead, it’s what the myth captures about the human experience that persists: hubris and guilt, or grief and terror, or sorrow and loss. When we turn to this tale, or any myth, we are seeking to understand ourselves.

One of my favorite “retellings” of Daedalus and Icarus is W. H. Auden’s poem “Musée des Beaux Arts,” which considers Brueghel’s painting Landscape with the Fall of Icarus. Auden uses the painting and the myth to reflect on how isolating the experience of suffering is: “About suffering they were never wrong,/ The Old Masters: how well they understood/ Its human position; how it takes place/ While someone else is eating or opening a window or just walking dully along.”[6] He notes how Icarus, having just fallen into the sea, visible only as a pair of legs in the lower right corner of the painting, goes unnoticed by all the other figures in the scene: “how everything turns away/ Quite leisurely from the disaster.”[7] Icarus is alone in his moment of terror.

The more difficult or profound the circumstance we are facing, the more we may feel ourselves alone. And yet the myth, the story itself, is an answer to this isolation. Turning to myth and all its retellings allows us to see our individual experience in others—even across different cultures and over thousands of years. Though Auden writes about the isolation of suffering, he’s found company in Brueghel…and in all the “Old Masters”—painters, sculptors, composers, storytellers—who have looked to the ancient tale of Icarus and Daedalus before and recognized some part of their own sorrow (or even brief-lived joy!) in the pair’s calamitous flight. There is comfort in seeing our experience across the tapestry of time.

When we speak of stories, we often use the language of “fiber.” We weave a tale or spin a yarn or carry the threads of a plot. In the myth of the Moirae, we ourselves are the threads, each of us a strand spun and cut by the Fates. Though the idea of human lives as single spun threads—which can be cut and lost on a whim—seems to echo the same vulnerability and isolation we see in the tale of Icarus, threads, of course, never remain in isolation: they are used in the weaving and mending of cloth. Stories are one of the ways we knit ourselves together. 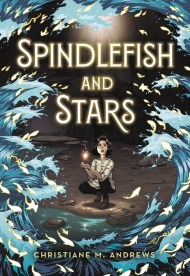 This spellbinding fantasy about a girl from the shadows and a boy from the sea is perfect for fans of The Girl Who Drank the Moon and The Book of Boy.

In which a story is spun.
And unspun.

Clothilde has lived her whole life in the shadows with her (sometimes) thieving and (always) ailing father. But when he fails to meet her one morning, sending her instead a mysterious ticket of half-paffage, Clo finds herself journeying across the sea to reunite with him. The ticket, however, leaves her on a sunless island inhabited only by creaking fishermen, a rumpled old woman, a piggish cat, and a moon-cheeked boy named Cary.

Clo is quickly locked away and made to spend her days in unnerving chores with the island's extraordinary fish, while the old woman sits nearby weaving an endless gray tapestry. Frustrated and aching with the loss of her father, Clo must unravel the mysteries of the island and all that's hidden in the vast tapestry's threads—secrets both exquisite and terrible. And she must decide how much of herself to give up in order to save those she thought she'd lost forever.

Inspired by Greek mythology, this spellbinding fantasy invites readers to seek connections, to forge their own paths, and to explore the power of storytelling in our interwoven histories.