“How come you write about famous people?” asked a third grader.

There I stood at another school visit stumped by a young person asking a question I’ve heard over and over again. You’d think that by now, since I write picture book biographies, I’d have a handy answer. But each time, that “fame question” throws me. I guess it’s because I don’t choose my subjects because they’re famous.

Instead, I’m drawn to stories about people who’ve changed history. For me, history has never made sense as a series of facts or dates (which I still rarely remember!). Instead, I tend to agree with the quote attributed to Ralph Waldo Emerson, “There is properly no history, only biography.” In my books, I try to show students that history, whether in science, politics, or the arts, is made by regular people. People who pursued a dream or a skill in a deep way—not because someone forced them, not because they wanted to be popular; but usually just because they were curious and liked the work. In other words, the young Abraham Lincoln didn’t know he was gonna be ABRAHAM LINCOLN. He was just Abe, that tall kid; the one who loved to read and made friends easily.

This view of history holds true for my new book, Otis & Will Discover the Deep: The Record-setting Dive of the Bathysphere, illustrated by Katherine Roy. It’s the story of how mechanical engineer, Otis Barton, and natural scientist, William Beebe, worked together to create the bathysphere—the first submersible craft that took human beings into the deep ocean.

William Beebe is well-known in scientific circles, but hardly a household name; and Otis Barton’s name is kind of off-the-grid all together. I didn’t know about either man ahead of writing the book. Instead, a few years ago, I read a small news item that used the word “bathysphere,” which I’d never heard, and became fascinated with the men who built it. I learned that Otis Barton started as a curious kid who built homemade diving equipment to see deeper into the ocean. And Will Beebe was so in love with nature’s mysteries that once he dove into the ocean for the first time, he never studied anything else.

Early on in the research of Barton and Beebe’s amazing adventures, the universe cooperated. My generic request to the Library of Congress website happened to be answered by a librarian, Constance Carter, who’d been Beebe’s assistant in the 1950’s. Photos, film, diaries, and archives were uncovered. There were historical accounts of at least nineteen bathysphere dives over four years. The challenge became how to winnow that much information into one picture book story. I decided to concentrate on a single bathysphere dive in June, 1930—the first time Otis and Will saw the deep ocean they’d dreamed of visiting since they were kids.

These childhood dreams drove Otis and Will to great discoveries. To satisfy their own questions, they struggled with scientific and mechanical problems. Most impressively, they put their lives on the line over and over again. Otis and Will became the first to see what lived below the ocean’s light level, or as the book’s refrain puts it, down, down, into the deep.

So, are Otis and Will famous? Well, none of the Kardashians have to worry that Otis Barton or Will Beebe will ever have more Instagram followers. At least not yet. But I hope you will agree that Otis and Will are better than famous; they are important.

And from now on that’ll be my answer. I don’t write about “famous people.” I write about “important people.” Why? Because each child is important and deserves role models with the same questions, curiosities, and feelings. Because each student is history’s future. 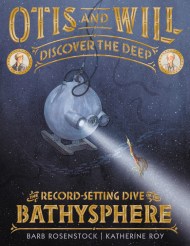 The suspenseful, little-known true story of two determined pioneers who made the first dive into the deep ocean.

On June 6, 1930, engineer Otis Barton and explorer Will Beebe dove into the ocean inside a hollow metal ball of their own invention called the Bathysphere.

They knew dozens of things might go wrong. A tiny leak could shoot pressurized water straight through the men like bullets! A single spark could cause their oxygen tanks to explode! No one had ever dived lower than a few hundred feet...and come back. But Otis and Will were determined to become the first people to see what the deep ocean looks like.

This suspenseful story from acclaimed author Barb Rosenstock with mesmerizing watercolors by award-winning artist Katherine Roy will put you right in the middle of the spine-tingling, record-setting journey down, down into the deep.