When, at nineteen, I encountered the Tristan legend for the first time, it felt more like watching an action-packed popcorn flick than reading a medieval manuscript. Forget Perceval, that pious weenie; Beroul’s The Romance of Tristan was the real blockbuster of a legend. It had magical potions, an evil dwarf, loads of lepers, dark and twisted love, problematic sex and an extravagance that couldn’t be missed. Someone should make this into a movie, I thought.

And in fact, someone did. I learned this one gray day several years and one move to New York later as I waited in traffic to go through the Lincoln Tunnel. There, soaring above the landscape of gridlocked cars, was a billboard of a medieval knight, his chiseled cheekbones so sharp they looked like they might impale his leading lady, his soulful eyes trained on the horizon.

Damn it, I thought. James Franco beat me to it.

But he was hardly the first. The Tristan and Iseult story was committed to the page sometime in the 12th century, though it was probably part of oral tradition for at least several centuries before. There are endless versions of the story, and therefore, endless variation in the intricacies of the plot, but the basics run something like this: Tristan, a knight of Cornwall, defeats the villainous Morholt and wins the hand of the Irish princess Iseult for his uncle, King Mark. On their way back to Cornwall, things don’t go quite as planned, and they end up drinking a love potion prepared by Iseult’s lady-in-waiting, Brangain. Iseult marries Mark, but continues to engage in some decidedly unstealthy adultery with Tristan, and when they’re caught, they escape to the wilderness. Eventually they make peace with Mark, though Tristan is banished from the kingdom. And—spoiler alert—in most versions, a tragic death scene for Tristan or for both lovers wraps things up.

If that sounds action-packed to you, you should know that that’s just the bare bones. In the Beroul version, the one I read as an undergraduate, there are fights with dragons, swords lodged in skulls, Iseult’s prowess as a mystical healer, a scene in which Brangain sneaks through the darkness to take Iseult’s place in Mark’s bed, a deranged dwarf with a penchant for outlandish adulterer-nabbing schemes, the main characters’ narrow avoidance of being burned at the stake, death-defying leaps from windows, an interlude in which Mark threatens to give Iseult to a gang of lepers, a second love interest for Tristan also named Iseult, and some magical love trees that Mark attempts to mow down like kudzu.

Many iterations of the legend embrace a similarly go-big-or-go-home attitude. There’s the Richard Wagner opera, for instance, which is the version that most Westerners know best. Wagner first conceived of it as a quick little side project to make him some cash in between composing parts of the Ring Cycle, but it turned into a four-hour ode to unresolved longing. A Norwegian poet, writing to his friend after viewing an early performance of Tristan und Isolde, declared it “the most enormous depravity I have ever seen or heard.”

But Wagner’s vision is only one among many: A John Updike novel, a film version from Vichy France, a song from a German power metal band, a Bollywood musical…even the oldest surviving European quilt tells the Tristan legend. Once I started looking, Tristan and Iseult were everywhere; they wouldn’t leave me alone. I wanted to find a way to make the story my own, but I was stymied by how to take the story of a medieval knight (to say nothing of the love potions and lepers) and write a version that felt fresh, that felt as though the world needed one more retelling.

The solution, as it turned out, had less to do with how to shoehorn a dragon scene into Bed-Stuy than recognizing what made some of those earlier versions so relevant to their fans. Wagner was inspired as he wrote Tristan und Isolde by events in his personal life, but also by events in the wider world. He was living as a political exile after his participation in a failed uprising in Germany; it’s not so hard to imagine him channeling those feelings into his Tristan and Isolde, both emigrants from the lands of their births, two fish out of water who stumble into the embrace of the other.

I began to understand that any version of Tristan and Iseult that I might write, if it was to be a worthwhile contribution to the eight-hundred-years-plus legacy of the story, would need to have resonance with the society around it, to serve as a window into my own little world of Brooklyn and beyond. I came to believe that the Tristan legend is so powerful because at its heart, it’s about the problems that still plague us today: our fear of people who are strange to us, our struggles with those in power, our helplessness in the face of forces that are beyond our control, our desperation to find a place or a person in the world to call home. That grandiosity that I felt when I first read the story wasn’t about love potions and swordplay. It was because the legend of Tristan and Iseult—like all the great stories that we find ourselves telling again and again, over decades, over centuries, over millennia—taps into something that makes us a little uncomfortable, that shows us our human flaws and frailties, that cuts close to the bone.

I thought a lot about those frailties, and then I finally, finally sat down at my computer and attempted to follow in the footsteps of Beroul and Wagner.

In my version of the story, Tristan becomes a chess prodigy rather than a knight, Izzy is an aspiring doctor rather than a magical healer, and not a single character is sold to a gang, comprised of lepers or otherwise. But what is perhaps more remarkable is how much stayed the same. The story is so beautifully elastic that it can be stretched to fit on a New York City billboard or the stage of a grand opera house or shrunk to fit onto the chessboards of Brooklyn, and it still makes us feel that stab of familiarity, that bittersweet recognition of love and longing and loss. After all these centuries, it’s still a blockbuster. 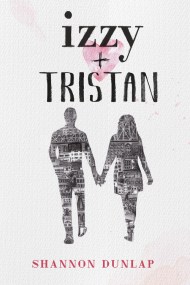 A classic romantic tale with a modern twist, this dazzling Indies Introduce pick follows two New York teenagers as they secretly fall in love for the first time.
Izzy, a practical-minded teen who intends to become a doctor, isn't happy about her recent move from the Lower East Side across the river to Brooklyn. She feels distanced from her family, especially her increasingly incomprehensible twin brother, as well as her new neighborhood.

And then she meets Tristan.

Tristan is a chess prodigy who lives with his aunt and looks up to his cousin, Marcus, who has watched out for him over the years. When he and Izzy meet one fateful night, together they tumble into a story as old and unstoppable as love itself.

In debut author Shannon Dunlap's capable hands, the romance that has enthralled for 800 years is spun new. Told from several points of view, Izzy + Tristan is a love story for the ages and a love story for this very moment. This fast-paced novel is at once a gripping tale of first love and a sprawling epic about the bonds that tie us together and pull us apart and the different cultures and tensions that fill the contemporary American landscape.