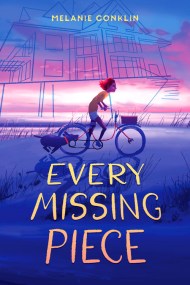 Maddy Gaines sees danger everywhere she looks: at the bus stop, around the roller rink, in the woods, and (especially) by the ocean. When Maddy meets a mysterious boy setting booby traps in the North Carolina woods, she suspects the worst.
Maddy is certain she's found Billy Holcomb-the boy who went missing in the fall. Except, maybe it's not him. It's been six months since he disappeared. And who will believe her anyway? Definitely not her mom or her stepdad . . . or the chief of police.
As Maddy tries to uncover the truth about Billy Holcomb, ghosts from her own past surface, her best friend starts to slip away, and Maddy's world tilts once again. Can she put the pieces of her life back together, even if some of them are lost forever? 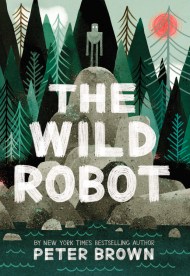 Wall-E meets Hatchet in this New York Times bestselling illustrated middle grade novel from Caldecott Honor winner Peter Brown
Can a robot survive in the wilderness?
When robot Roz opens her eyes for the first time, she discovers that she is alone on a remote, wild island. She has no idea how she got there or what her purpose is--but she knows she needs to survive. After battling a violent storm and escaping a vicious bear attack, she realizes that her only hope for survival is to adapt to her surroundings and learn from the island's unwelcoming animal inhabitants.
As Roz slowly befriends the animals, the island starts to feel like home--until, one day the robot's mysterious past comes back to haunt her.
From bestselling and award-winning author and illustrator Peter Brown comes a heartwarming and action-packed novel about what happens when nature and technology collide. 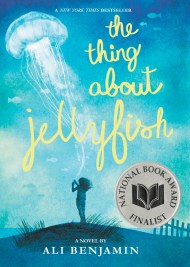 This stunning debut novel about grief and wonder was an instant New York Times bestseller and captured widespread critical acclaim, including selection as a 2015 National Book Award finalist!

After her best friend dies in a drowning accident, Suzy is convinced that the true cause of the tragedy must have been a rare jellyfish sting--things don't just happen for no reason. Retreating into a silent world of imagination, she crafts a plan to prove her theory--even if it means traveling the globe, alone. Suzy's achingly heartfelt journey explores life, death, the astonishing wonder of the universe...and the potential for love and hope right next door.

Oddlot Entertainment has acquired the screen rights to The Thing About Jellyfish, with Gigi Pritzker set to produce with Bruna Papandrea and Reese Witherspoon. 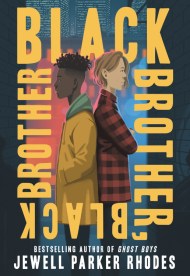 When he's bullied and framed by the captain of the fencing team, "King" Alan, he's suspended from school and arrested for something he didn't do. 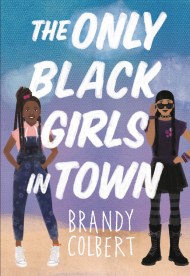 The Only Black Girls in Town

Award-winning YA author Brandy Colbert's debut middle-grade novel about the only two black girls in town who discover a collection of hidden journals revealing shocking secrets of the past.

Beach-loving surfer Alberta has been the only black girl in town for years. Alberta's best friend, Laramie, is the closest thing she has to a sister, but there are some things even Laramie can't understand. When the bed and breakfast across the street finds new owners, Alberta is ecstatic to learn the family is black-and they have a 12-year-old daughter just like her.

Alberta is positive she and the new girl, Edie, will be fast friends. But while Alberta loves being a California girl, Edie misses her native Brooklyn and finds it hard to adapt to small-town living.

When the girls discover a box of old journals in Edie's attic, they team up to figure out exactly who's behind them and why they got left behind. Soon they discover shocking and painful secrets of the past and learn that nothing is quite what it seems. 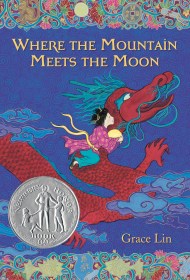 Where the Mountain Meets the Moon

A Newbery Honor Winner
A New York Times Bestseller
This stunning fantasy inspired by Chinese folklore is a companion novel to Starry River of the Sky and the New York Times bestselling and National Book Award finalist When the Sea Turned to Silver
In the valley of Fruitless mountain, a young girl named Minli lives in a ramshackle hut with her parents. In the evenings, her father regales her with old folktales of the Jade Dragon and the Old Man on the Moon, who knows the answers to all of life's questions. Inspired by these stories, Minli sets off on an extraordinary journey to find the Old Man on the Moon to ask him how she can change her family's fortune. She encounters an assorted cast of characters and magical creatures along the way, including a dragon who accompanies her on her quest for the ultimate answer.

Grace Lin, author of the beloved Year of the Dog and Year of the Rat returns with a wondrous story of adventure, faith, and friendship. A fantasy crossed with Chinese folklore, Where the Mountain Meets the Moon is a timeless story reminiscent of The Wizard of Oz and Kelly Barnhill's The Girl Who Drank the Moon. Her beautiful illustrations, printed in full-color, accompany the text throughout. Once again, she has created a charming, engaging book for young readers.

"Amira, look at me," Muma insists.
She collects both my hands in hers.
"The Janjaweed attack without warning.
If ever they come-- run."
Finally, Amira is twelve. Old enough to wear a toob, old enough for new responsibilities. And maybe old enough to go to school in Nyala-- Amira's one true dream.
But life in her peaceful Sudanese village is shattered when the Janjaweed arrive. The terrifying attackers ravage the town and unleash unspeakable horrors. After she loses nearly everything, Amira needs to dig deep within herself to find the strength to make the long journey-- on foot-- to safety at a refugee camp. Her days are tough at the camp, until the gift of a simple red pencil opens her mind-- and all kinds of possibilities.
New York Times bestselling and Coretta Scott King Award-winning author Andrea Davis Pinkney's powerful verse and Coretta Scott King Award-winning artist Shane W. Evans's breathtaking illustrations combine to tell an inspiring tale of one girl's triumph against all odds. 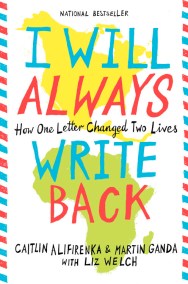 I Will Always Write Back

The New York Times bestselling true story of an all-American girl and a boy from Zimbabwe -- and the letter that changed both of their lives forever.

It started as an assignment. Everyone in Caitlin's class wrote to an unknown student somewhere in a distant place.

Martin was lucky to even receive a pen-pal letter. There were only ten letters, and fifty kids in his class. But he was the top student, so he got the first one.

That letter was the beginning of a correspondence that spanned six years and changed two lives.

In this compelling dual memoir, Caitlin and Martin recount how they became best friends--and better people--through their long-distance exchange. Their story will inspire you to look beyond your own life and wonder about the world at large and your place in it.

A Stonewall Children's & Young Adult Honor Book!
In the wake of a destructive tornado, one girl develops feelings for another in this stunning, tender novel about emerging identity, perfect for fans of The Thing About Jellyfish.
When a tornado rips through town, twelve-year-old Ivy Aberdeen's house is destroyed and her family of five is displaced. Ivy feels invisible and ignored in the aftermath of the storm--and what's worse, her notebook filled with secret drawings of girls holding hands has gone missing.
Mysteriously, Ivy's drawings begin to reappear in her locker with notes from someone telling her to open up about her identity. Ivy thinks--and hopes--that this someone might be her classmate, another girl for whom Ivy has begun to develop a crush. Will Ivy find the strength and courage to follow her true feelings?
Ivy Aberdeen's Letter to the World exquisitely enriches the rare category of female middle-grade characters who like girls--and children's literature at large.

Among these biographies, readers will find heroes, role models, and everyday women who did extraordinary things - bold women whose actions and beliefs contributed to making the world better for generations of girls and women to come. Whether they were putting pen to paper, soaring through the air or speaking up for the rights of others, the women profiled in these pages were all taking a stand against a world that didn't always accept them.


The leaders in this book may be little, but they all did something big and amazing, inspiring generations to come.