There are two kinds of people in the world. People who read and people who don’t. If I were to tell you that people who read are better than They Who Shall Not Be Named, my claim would find a receptive audience. You are, after all, reading at this very moment, so it is probable you’ve got a bit of a bias.

Luckily, we do not have to rely on my assertion, so your tendency to believe me doesn’t matter much. We can rely on science. Studies have shown that reading makes for more empathic human beings, that it increases our ability to step into people’s shoes, to imagine their internal lives, and so causes us to treat others better.

People who read stories about Muslim characters, like More Than Just a Pretty Face to choose an example for entirely self-serving purposes, are less likely to make broad stereotypical judgements about Muslims.

What I find fascinating about these studies is the reaction to them. They get posted on social media, which allows readers to feel morally superior for a while before going on with their day. This is not surprising information, after all. Reading is good. It is a tool in the development of human beings. We already knew that.

A more interesting and less discussed though also fairly obvious point that these studies make, is this: tolerance and empathy are skills. They are improved by experience—even the virtual experience of reading—and exposure to other cultures, value systems, beliefs and histories.

When I wrote More Than Just a Pretty Face, I began with a protagonist who didn’t like to read and who wasn’t academically gifted. He did, however, have a natural talent that made him exceptional. He had an open, kind, sympathetic heart.

Over the course of the story, as he read or learned more about the histories of the people around him, he came to understand and appreciate them better because, as noted, empathy is a skill. We can grow in tolerance and our capacity to love if we try to understand people and their narratives better. This becomes particularly evident in Danyal’s relationship to his father, from whom he is separated not just by a generational divide, but also by the stages of the immigrant experience they inhabit.

This is one of the reasons why the nascent movement in young adult literature to recognize and promote diversity of all kinds is so vital. The more we collectively understand people who haven’t lived the lives we have, the better the world becomes. When we are talking about building skills, therefore, diverse fiction has a critical role to play.

I’ll conclude by saying that while you should obviously read More Than Just a Pretty Face—I too may have a bias—you should read other Muslim authors as well. It isn’t enough to read one or two authors representing a certain religion or race or sexuality, because none of those identities is a monolith and the perspective you gain from one book is going to be different than the one you get from another.

Speaking for Muslims, for example, I’ve met many people who practice ardently and act as their religion expects them to, but I’ve also known Muslims who drink and who don’t pray or who have boyfriends and girlfriends and who aren’t straight or just aren’t sure. All these experiences are valid, and they all deserve to be represented and read. Tolerance and empathy are skills, not just for people on the outside of minority identities, but also for those within.

So, yes, reading is good, and you should read a great deal, but you should also read widely. It’s one way to make the world a better place. 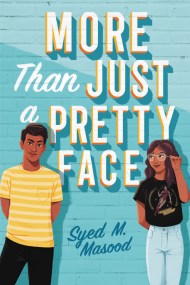