The Night Witches were the first all-women’s combat regiment in modern history. They fought red tape (if you’ll forgive the pun), bureaucracy, and sexism for the right to fly the worst the USSR had to offer against a far superior German war machine. Their official name was the 588th Night-Bombing regiment, and on paper their mission was simple: drop things. They dropped bombs, leaflets, bricks, and railroad ties—anything that would keep the Germans from sleeping.

They flew inferior biplanes that were so slow, enemy aircraft couldn’t even catch them; planes that tried had to slow down so much that their engines stalled. The Night Witches flew so low to the ground they could be shot by your average German with a gun, and their planes were so flammable that usually one shot was all it took to bring them down. Nevertheless, they were dubbed Nachthexen by the Germans for their deadly silence and precision. Every night the Night Witches would cruise to their target, then shut off the engine to make a silent dive. They’d release the bombs (sometimes climbing out on the wing to release a sticky trigger) and restart the engine as they pulled away. The Night Witches made up to eighteen of these missions a night.

When fighting for the Soviet Union, their lives weren’t the only things on the line. They had to excel over the men on their base to shake a reputation of inferiority that they’d never earned. Worse, the USSR had a hard policy on soldiers that were captured or went missing in enemy territory: they were assumed to have defected or broken under torture, and were considered traitors until and unless their loyalty was proved to the state. Some women who died in enemy territory weren’t properly recognized for decades after the war was over.

I hope you enjoy it. 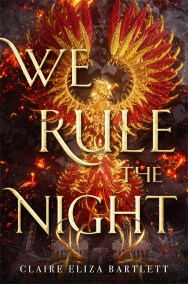 We Rule the Night

Two girls use forbidden magic to fly and fight -- for their country and for themselves -- in this riveting debut that's part Shadow and Bone, part Code Name Verity.

Seventeen-year-old Revna is a factory worker, manufacturing war machines for the Union of the North. When she's caught using illegal magic, she fears being branded a traitor and imprisoned. Meanwhile, on the front lines, Linné defied her father, a Union general, and disguised herself as a boy to join the army. They're both offered a reprieve from punishment if they use their magic in a special women's military flight unit and undertake terrifying, deadly missions under cover of darkness. Revna and Linné can hardly stand to be in the same cockpit, but if they can't fly together, and if they can't find a way to fly well, the enemy's superior firepower will destroy them -- if they don't destroy each other first.

We Rule the Night is a fiercely compelling story about sacrifice, complicated friendships, and survival against impossible odds.