Harlem is a place that looms large in the imagination and cultural history of Black America. And Harlem is present in my home. On one wall is a framed poster from the 1997 Walter Dean Myers and Christopher Myers book Harlem. In my bedroom is the poster celebrating the June 2001 Apollo Theatre performance of the Dance Theatre of Harlem, proclaimed on the poster to be “classically American.” Certainly, there have been, and are, other centers of Black creativity in this country, but Harlem is among the most heralded.  A few years back, I decided to visit the New York Public Library and ended up in the gift shop, looking at numerous children’s books about New York City, many of them ABC books. But not one of them lingered on Harlem. That experience is what propelled me to propose to my editor a volume which has now become H is for Harlem, which I was honored to create with award-winning artist April Harrison. Together, what we hope we’ve created is an educational, meaningful, inspiring, tribute to this iconic neighborhood.

Like all neighborhoods and cities, Harlem has gone through transformations and changing demographics. I hope that the transformation includes people of all backgrounds. But my nostalgic streak, for good or for bad, keeps me from surrendering the Black Harlem too easily. Thus, my text for the letter H:

“H is for Harlem. Harlem is a place like no other in the world. The Lenape, an American Indian people, were the first to live here and to honor this land they called Muscota. In the 1600’s, immigrants arrived from the Netherlands, and named I after a city called Haarlem, spelled with a double letter A. Harlem has been home to many Americans, with ancestors from many countries. It is truly multicultural. But for a long time people have called Harlem the mecca of Black America, a place where African American culture is living and breathing, shining and indestructible.”

As world history tells us, in the past and in the present moment, no one people have a claim on any Place. The Lenape know that history all too painfully. And as an African American woman, and a student of African American culture, I occupy a certain position in relationship to Harlem. My clear intention with H is for Harlem is to highlight and to celebrate the relationship between a certain place and a certain people, whose legacy will endure.

How does one go about creating an ABC book? It takes more than inspiration. It’s more difficult than most people would guess, especially when the subject is as laden with historical significance as Harlem. My first step was to read extensively and then to make lists of possibilities for each letter.  Some letters were easy. Nothing other than The Apollo Theater would feel right for the letter A. Nothing other than the Harlem Globetrotters would feel right for the letter G. D had to be for Dance Theatre of Harlem. But even that entry was not straightforward. Not having read Cicely Tyson’s autobiography, I did not know until her death that she was instrumental in the founding of the DTH. Fortunately, the book was not finalized yet, so April and I were able to revise that page.

Some other entries were more complicated than the letters A, G, and D. For example, I knew that S had to be for Schomburg. But I couldn’t leave out Striver’s Row, an important street where many notable people once lived. I couldn’t leave out the Savoy Ballroom, ‘which was always jumping with music and dance.’ I couldn’t leave out the Sugar Hill Museum of Art and Storytelling. The answer was to write a somewhat long text for this entry so that all of these could be included, all leading up to the Schomburg Center for Research in Black Culture. My text includes the information that ‘Arturo Schomburg was a true bibliophile, a person who loves books. The books closest to his heart were those that teach readers about life in the African diaspora—everywhere that people of African descent have called home.’

In addition to The Apollo and the Schomburg, within Harlem are countless buildings and spaces that are iconic or historically important in some way. For instance, before researching for this book, I had no idea about the history of the Harlem branch of the YMCA (Young Men’s Christian Organization), ‘built during a time when African Americans were not welcome at the other branches.’ I had no idea that it is designated as a National Historic Landmark. But what makes a building important, what gives it meaning, are the people who inhabit it. So even though the endpapers of the books are images of buildings, the body of the book centers on those people—the people who create the art that is on display at the Studio Museum of Harlem, the people who wrote the books shared at The Liberation Bookstore.  There was no way a book about Harlem landmarks could not celebrate bookstores.

No, I didn’t find books about Harlem among the children’s books during my visit to the New York Public Library on that trip several years ago. I didn’t find Bryan Collier’s Uptown, which I refer to in H is for Harlem as ‘a Harlem, Uptown love song.’ What I did find was the inspiration to write my own praise song to this “place where African American culture is living and breathing, shining and indestructible.” 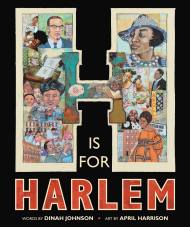 Discover the Harlem icons that have defined generations of American culture. Harlem is full of remarkable treasures, including museums, performance spaces, community centers, and more—all of which come to life in this lavish celebration of Harlem as an epicenter of African American history and a vibrant neighborhood that continues to shape our world. At once a love letter and a rich alphabetical archive, H Is for Harlem highlights communities and traditions that connect our past and present.