Sometimes when I start a project, what seems like a brilliant, ground-breaking concept often loses its luster once I start typing. So I wasn’t all that surprised when I plucked the title of Peach and Plum from my Story Ideas List and lost interest halfway down the first page. To be fair, it wasn’t Peach or Plum’s fault. It was me. I had fallen into all of my old familiar writing patterns and potholes.

But something felt different this time. Peach and Plum were enticing characters, so I decided to give them a second chance. I deleted the beginning and tried again; this time, letting the two friends simply talk to each other. No description, just dialogue. Like magic, the three of us were suddenly unshackled from the creative constraints of narrative text. Now we could just play.

That’s when I realized I wasn’t writing a picture book anymore. Peach and Plum clearly wanted to be in a graphic novel, which was completely uncharted territory for me. I had always enjoyed reading comics and graphic novels, but did I need someone’s official clearance to jump formats? Trusting my instincts, I allowed myself to try—and discovered a whole new passion for the art form. Speech balloons! Multiple panels on a single spread! A visually cinematic approach to storytelling! It was like being handed keys to a new car.

Of course, there was one aspect of my particular writing style I couldn’t resist: rhyming. Most of my picture books are rhymers. So, why couldn’t a graphic novel be in rhyme, too? Turns out it could. Rhyming adds an extra layer of puzzle solving that keeps me on my toes. It also results in a more focused, streamlined text. Peach and Plum’s banter became pithy, rhythmic, and fun; a perfect combination for early readers. Eureka! I had found my target audience.

Early readers are remarkable, curious people at a critical junction in their lives. It’s a challenge to engage them, and a thrill to entertain them. With emerging independent readers in mind, I began to shape the book into a series of short, self-contained chapters. Peach and Plum’s adventures included riding bikes, flying kites, visiting the beach, and working through chores. The words came quickly, and within a couple of weeks I had a relatively polished draft. There was just the little matter of the illustrations.

In a previous life, I worked as a graphic designer, creating logos and signage, laying out ads, brochures, and newsletters. But actual illustrating? Nah. I get sweaty palms in art supply stores. All those paints and pens and paper stocks. It’s too much. The extent of my illustrating experience amounted to the occasional napkin doodle. So now, instead of a cluttered art studio, I have an iPad and a couch. Armed with a very forgiving digital brush and unlimited “undos,” I plunged ahead.

My best work tends to materialize when I don’t know what I’m doing. Well, okay, I rarely ever know what I’m doing. But when I’m prodded to step outside my comfort zone and try something new, that’s when I surprise myself and others. As a writer, I could easily visualize the town of Fruitdale and all of its inhabitants. As the illustrator, I might as well have asked myself to paint the Sistine Chapel. But somehow, through a series of rough sketches that tightened up with each pass, I got Peach and Plum into a presentable form that comes close to the images in my head.

Once the book went out on submission I braced myself for editors to politely suggest I stick to writing picture books. But they didn’t. In fact, Peach and Plum won their hearts—illustrations and all.

Today I find myself on a new, unexpected path that branched off the well-paved road I thought I was traveling. I’m an early graphic novel author-illustrator! If Peach and Plum have taught me anything, it’s that potholes can lead to possibilities. And the only permission you need to change directions is your own. 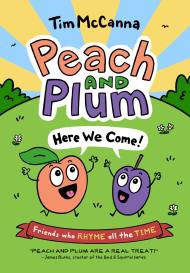 Peach and Plum: Here We Come!

Here they come! It's Peach and Plum!

Welcome to Fruitdale! School is out and work is done. Now it's time for summer fun. Peach and Plum have lots to do. Beach day, bikes, and basketball, too. Will they wind up stuck indoors with a pesky list of chores? True adventure never ends for this pair of sweet best friends.

Ripe with humor and bursting with rhyme, these five short stories and four mini-comics will have newly independent readers wriggling, giggling, and going bananas for Peach and Plum.