1. Your videos and messages have been broadcast around the world, on screens big and small. What inspired you to write a book about your experiences?

Muhammad: I wanted to write about my experiences in Syria so that I could share my stories with children around the world who might be going through their own struggles, even if they are different than mine. Sometimes when I’m struggling myself, I like to read books about other people who have overcome hardship, to see how they got through those difficult times. Even if I’m not facing exactly what they are facing, it does help. So I’m hopeful that our book will help other kids see that it’s possible to get through struggle, even when it seems so difficult.

2. Can you describe how you worked together to craft the book?

Nora: I had the idea to write a book about Muhammad’s story first, but I wasn’t sure if he would like the idea—or even trust me to help tell his story. We talked about it a lot in Whatsapp messages and on video calls, but soon I decided to visit him and his family in Istanbul, Turkey so that we could get to know each other better and he could make an informed decision about whether he wanted to work together!

Muhammad: At first, I honestly didn’t believe that we’d really get a book published. But when Nora came to me, I could see her face and she was so excited that it made me excited also. It’s hard to trust nowadays, but I looked in her eyes and could see that I wanted to share my story with her. She ate with my family and at that time became one of the family, so a trust was built between each other.

My English was kind of rubbish, as you say, at the time. So I told her my story.

Nora: From then on, we worked together through a process of Muhammad and his family telling me their stories through interviews, both in person and then on video calls once I was back in New York. Then, I’d write each scene and send the chapters back to them to review and make any changes they wanted. We’d go back and forth like that until it felt like we captured the full truth of each scene.

3. What about a graphic novel format appealed to you, and what was it like to see the art come together?

Nora: My first exposure to Muhammad was through his videos, which paint an incredibly moving picture of life during war in Syria. His story was always so visual, so I knew from the beginning his story would be best told through a graphic novel, and thankfully he agreed!

Muhammad: I’ve always like books with illustrations and photos. And especially because our book is for children and teens, I think the illustrations help our readers to really imagine what is happening. Also, the graphic storytelling means that people who don’t speak English can still follow-along and read our book.

4. What was your family’s reaction to the book?

Muhammad: At first, they didn’t believe it would actually happen! But now it’s kind of amazing. Our family has a book now! It is unbelievable. My brother Fadi really wanted to read the book even though he doesn’t speak English, so he followed along with the illustrations and understood it and really loved it.

I just wish my father was alive to see it. Maybe he would be proud of me, I don’t know.

Nora: The other day, Hiba sent me a picture of her toddler son Rayan “reading” the book, pointing at the pictures of his father and mother first meeting and later their wedding. He recognized them! It’s incredibly moving to imagine Rayan, and his little sister, growing up and having this book to learn about their family’s story from before they were born.

5. Your story is so inspiring, from the courage and perseverance your entire family displays every day, to your determination to use your voice to enact change. What do you hope readers take away from the book?

Muhammad: Well, in all the struggles in life, I believe you can find a way to change your own future and to keep hope. For me, living through the siege in eastern Ghouta and almost dying was horrific, but I found hope by telling people’s stories. I hope that readers, especially kids, find their own ways to get through difficult times by helping other people. If you see someone else struggling, go help them. Try to look a different way and you will find hope. We always have to look for a way for us to hope because if we don’t, who can change this world?

6. I was so excited that Hiba’s famous yebrak recipe is in the book and I can’t wait to try it! Any tips for a beginner cook?

Muhammad: [Laughs] Well… I’ve tried to make it myself, but really I just help Hiba. So no, honestly, I don’t have advice!

Nora: My advice comes directly from Hiba, which is to be gentle with the grape leaves and make sure not to rip them or else the filling falls out! 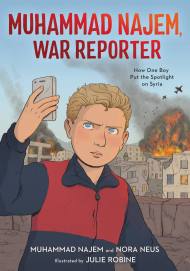 A teenage boy risks his life to tell the truth in this gripping graphic memoir by youth activist Muhammad Najem and CNN producer Nora Neus.

Muhammad Najem was only eight years old when the war in Syria began. He was thirteen when his beloved Baba, his father, was killed in a bombing while praying. By fifteen, Muhammad didn’t want to hide anymore—he wanted to act. He was determined to reveal what families like his were enduring in Syria: bombings by their own government and days hiding in dark underground shelters.

Armed with the camera on his phone and the support of his family, he started reporting on the war using social media. He interviewed other kids like him to show what they hope for and dream about. More than anything, he did it to show that Syrian kids like his toddler brother and infant sister, are just like kids in any other country. Despite unimaginable loss, Muhammad was always determined to document the humanity of the Syrian people. Eventually, the world took notice.

This tenderly illustrated graphic memoir is told by Muhammad himself along with CNN producer Nora Neus, who helped break Muhammad’s story and bring his family’s plight to an international audience.