It’s World Energy Conservation Day, which makes a great opportunity to remind your young readers about the amazing world we live in. And what better way to do that than with books! As human beings, we share this planet with some amazing animals and beautiful environments filled with natural resources. Unfortunately, many of those animals and their homes are endangered or threatened by our consumption of nature’s resources. Luckily, there are ways to help, even for young people. It’s never too early to talk about conservation, so share these entertaining and informative reads with your young readers! And remember, today’s not the only day to keep our planet in mind, there’s also World Wildlife Day (March 3), Earth Day (April 22), and many more reminders that we must be mindful stewards of the Earth and its many inhabitants. 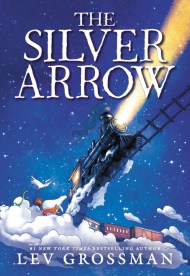 Kate and her younger brother Tom lead dull, uninteresting lives. And if their dull, uninteresting parents are anything to go by, they don't have much to look forward to. Why can't Kate have thrilling adventures and save the world the way people do in books? Even her 11th birthday is shaping up to be mundane — that is, until her mysterious and highly irresponsible Uncle Herbert, whom she's never even met before, surprises her with the most unexpected, exhilarating, inappropriate birthday present of all time: a colossal steam locomotive called the Silver Arrow.

Kate and Tom's parents want to send it right back where it came from. But Kate and Tom have other ideas — and so does the Silver Arrow — and soon they're off to distant lands along magical rail lines in the company of an assortment of exotic animals who, it turns out, can talk. With only curiosity, excitement, their own resourcefulness and the thrill of the unknown to guide them, Kate and Tom are on the adventure of a lifetime . . . and who knows? They just might end up saving the world after all. 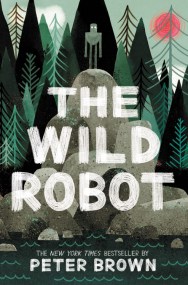 Can a robot survive in the wilderness?

When robot Roz opens her eyes for the first time, she discovers that she is all alone on a remote, wild island. She has no idea how she got there or what her purpose is–but she knows she needs to survive. After battling a violent storm and escaping a vicious bear attack, she realizes that her only hope for survival is to adapt to her surroundings and learn from the island’s unwelcoming animal inhabitants.

As Roz slowly befriends the animals, the island starts to feel like home–until, one day, the robot’s mysterious past comes back to haunt her. 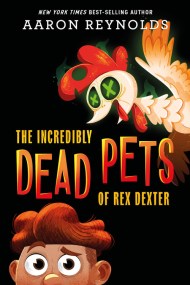 Rex Dexter is itching to have a dog . . . but ends up with a pet chicken. One hour and fourteen minutes later, the chicken is dead (by a steamroller), Rex is cursed (by the Grim Reaper), and wild animals are haunting Rex’s room (hounding him for answers). Even his best friend Darvish is not going to believe this, and that kid believes everything.

Rex’s uninvited ghostly guests are a chatty, messy bunch. And they need Rex to solve their mysterious deadly departures from the Middling Falls Zoo before it happens again. But how? 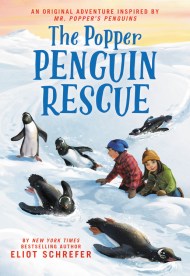 It’s been years and years since the Popper family lived in Stillwater, but the town is still riding high on its former penguin residents. Across the river, in Hillport, residents try to re-create the magic with penguin carnival rides and penguin petting zoos, pretending they’re the Popper originals. As the years have gone by, fewer and fewer people have come, and the small attractions shuttered.

Nina and Joe Popper have just moved to Hillport with their mother. There’s a lot to do: unpacking, scrubbing the floors, investigating the basement — wait, what’s this? Two penguin eggs are tucked snugly near the furnace!

It’s up to Nina and Joe to find their newly hatched penguin chicks a home. Setting off on the adventure of a lifetime, they endure perilous storms, a long journey to the Arctic, and of course, penguins. Lots and lots of Popper penguins! 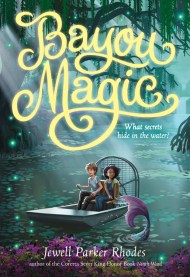 It’s city-girl Maddy’s first summer in the bayou, and she just falls in love with her new surroundings – the glimmering fireflies, the glorious landscape, and something else, deep within the water, that only she can see. Could it be a mermaid? As her grandmother shares wisdom about sayings and signs, Maddy realizes she may be the only sibling to carry on her family’s magical legacy. And when a disastrous oil leak threatens the bayou, she knows she may also be the only one who can help. Does she have what it takes to be a hero? Jewell Parker Rhodes weaves a rich tale celebrating the magic within. 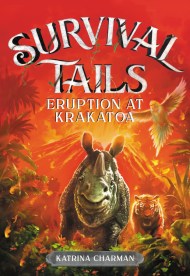 Parakeet Melati lives with the rest of her bird friends and family on the beautiful slopes of the Indonesian island of Krakatoa. While rumblings sometimes sound from deep within the earth, the birds live peacefully in their jungle. But when Melati is woken by tremors stronger than she’s ever felt before, she realizes that her sleeping island volcano may not be sleeping any longer.

Across a narrow stretch of water lives Budi, a rhinoceros, and his old friend Raja, the tiger king of the jungle. When Melati arrives with a dire warning that something is happening to Krakatoa, Raja believes the animals are safest in the jungle, but Budi disagrees. As ash rains down on the island and the earthquakes worsen, Raja must put aside his fears and put his trust in Budi. Otherwise, the animals of the jungle will never stand a chance against the mighty eruption of Krakatoa.