After an entire young life of enslavement, twelve-year-old Homer escapes Southerland Plantation with his little sister Ada, leaving his beloved mother behind. Much as he adores her and fears for her life, Homer knows there’s no turning back, not with the overseer on their trail. Through tangled vines, secret doorways, and over a sky bridge, the two find a secret “maroon” community” called Freewater, deep in the recesses of the swamp.

In this new, free society made up of escaped slaves and some born-free children, Homer cautiously embraces a set of spirited friends, almost forgetting where he came from. But when he learns of a threat that could destroy Freewater, he hatches a plan to return to Southerland plantation, overcome his own cautious nature, and free his mother from enslavement. Loosely based on a little-mined but important piece of history, this is an inspiring and deeply empowering story of survival, love, and courage.

Maroon history is just made for great storytelling! Imagine enslaved people, escaping and finding ways to live free yet clandestine lives in the wilderness. I was pleased to learn of this real history here in the American South, particularly in the Great Dismal Swamp. That was great inspiration for writing Freewater.

My research was multi-layered. I started small, just at my local library. There I found the most widely available literature—books and articles on maroon communities in the Caribbean and South America. Then I went to bigger and better resourced libraries like the Library of Virginia and the Library of Congress. There I found books, but also archival videos on maroons, particularly those in Jamaica. Still I yearned for more information on maroons in the United States. I was fortunate, because during my research Dr. Sylviane Diouf published her amazing book, Slavery’s Exiles- The Story of the American Maroons. It was a gold mine of information about maroons throughout the American South. It’s there that I learned about the Great Dismal Swamp and how it was a refuge for enslaved people from the 1700s until the Civil War. I was amazed and excited. That history, along with maroon history from maroon enclaves and communities throughout the Americas inspired Freewater. I met with Prof. Daniel Sayers, the leading archaeologist on maroons in the Great Dismal. I also visited the Great Dismal.

The Great Dismal is extraordinary in the many ways African Americans came to be there. There were those maroons who lived on the fringes— surviving by stealing from nearby plantations or by acquiring goods from friends and relations who lived there.  Enslaved people were brought to the swamp for work building canals, cutting wood for shingles and for other business ventures. George Washington was a major investor in the Dismal and used enslaved labor for much of his ventures. Then there were those maroons who settled clandestinely deep in the swamp. They were thought to have survived primarily on what the swamp could provide.

The clandestine and mysterious nature of maroons made it a hotbed for storytelling adventure. What better way to capture the imagination of children and their parents? Maroons simply haven’t been discussed much in literature nor elsewhere. This felt like new ground when discussing slavery. I think we all could use some new ground on this very old hard topic. Perhaps the typical person who might shy away from the topic would take a second look and read my book. Who knows what new conversations could be had and ideas sparked by mining this bit of history. 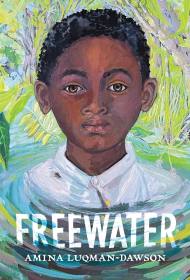