When I first began writing The Truth About White Lies, I failed so many times, partially because I wasn’t entirely sure what I was setting out to do! In the early days and in those early drafts, I merely believed that young white people needed more stories showing white characters overcoming racist conditioning. (That approach got me a white savior narrative I put into a drawer and never looked at again.) Another draft or two later, I slowly came to realize that I was skipping a critical part of the journey toward rejecting white supremacist culture – the conditioning itself. Time went on, and I became more sure: I needed to tell a story that explored what it means to be white; that interrogated the subtle ways we as white people choose whiteness over humanity, often without even realizing it.

It was challenging doing this in a young adult novel, as studies show that the process of white supremacist conditioning begins much younger, around age 3 and 4. By the time a person is a young adult, they are deeply entrenched in the kind of racist thinking that is so pervasive it goes unnoticed (by white people, that is). But that’s the magnificence of teenagers: this age of deep questioning is a gift. They are ready to throw out everything they’ve been told and decide for themselves what they believe. So, in revising the book that eventually became The Truth About White Lies, I knew I needed to write something that did what only novels can do: dig deep into the guts of the matter and ask, “Does any of this feel familiar? Who are you going to be?”

But in the writing and rewriting (and rewriting), I realized that I had to be more compassionate and intentional than I had ever been, because the impulse to shame Shania, the character I had created, was strong. Many of her actions are shameful, after all. She is at times cowardly, cruel, and selfish. But I too have been all those things in my life – some more recently than I care to admit. So I had to lean hard into my own feelings of shame and regret when crafting Shania; tapping into memories where instead of speaking up, I went with the flow. Times when I thought I was doing the right thing but hurt someone instead. Often the hurt I created grew from what I didn’t say, from what I chose to accept.

Much of the individual reinforcement of white supremacy comes from white people avoiding conflict, trying not to rock the boat. And so I asked myself, what sea must Shania be sailing on where her fear of the waves is this great? Because this is all of us white people at any given moment. What are we so afraid of losing, that we cling to the boat full of holes which carries us? For someone reading The Truth About White Lies, it might be easy to say to Shania, “You have nothing to lose! Why are you fighting so hard to keep so little?! Look at all that you have to gain!” It’s easy to do that for a character in a book. But do we have the courage to turn the lens on ourselves? Maybe not yet. But that’s part of why I wrote this book – as a blueprint, as a road map.

Many librarians and teachers are familiar with Dr. Rudine Sims Bishop’s analogy of windows and mirrors, which was intended to highlight the importance of Black children being able to not only peer into other worlds, but see themselves reflected in the world of literature. I thought about mirrors and windows a lot when writing The Truth About White Lies, because although I think it’s undeniable that white children aren’t lacking mirrors of themselves as heroes, they are lacking meaningful literature that interrogates whiteness. They are lacking mirrors that reflect the ugliness of racism and its pervasiveness, but also – a sort of mirror-as-portal – offer a road map out of it. Can a book be a mirror, a window, a sliding door, and also an exit ramp? I think so.

I believe there’s a tendency of white writers to depict our white protagonists as Super Allies, born on the page with a BLM poster in their fist and instilled with a complete and perfect vocabulary of social justice. Any other white character in a story “about race” who is not that Super Ally is often cast as Racist Villain. (This is when we bother to write “about race” at all. Though of course, we are always writing about race – especially in the stories where we act like it doesn’t exist.) But either way, this binary born of white supremacy locks us ever more tightly into racist modes of understanding. If a young reader believes themselves good, if they believe their family and friends are good (as most of us do), then how are they to recognize their racist attitudes and behaviors as such? Not many of us actually believe ourselves to be villains, so when there are two options – good or bad, racist or not racist – what would we rather believe of ourselves, of the people close to us?

Instead, I realized, I want white readers to interrogate their whiteness. To look at Shania and, in her story, find a safe place to explore and reflect on how it feels in their body when they choose whiteness over humanity, how it feels in their heart when they ignore the call of justice in favor of not rocking the boat. If I have only one hope for this book, then that’s for its readers to realize we have so little to lose by rejecting whiteness…and everything, everything, everything to gain. 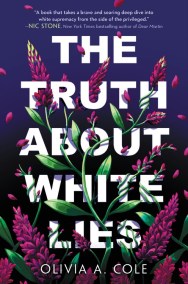 The Truth About White Lies

by Olivia A Cole

For fans of I'm Not Dying with You Tonight, this gripping YA novel digs into the historical and present-day effects of white supremacy and the depths of privilege.

Shania never thinks much about being white. But after her beloved grandmother passes, she moves to the gentrifying town of Blue Rock and is thrust into Bard, the city's wealthiest private school. At Bard, race is both invisible and hypervisible, and Shania's new friends are split on what they see. There's Catherine, the school's queen bee, who unexpectedly takes Shania under her wing. Then there's Prescott, the golden boy who seems perfect...except for the disturbing rumors about an altercation he had with a Black student who left the school.

But Prescott isn't the only one with secrets. As Shania grieves for the grandmother she idolized, she realizes her family roots stretch far back into Blue Rock's history. When the truth comes to light, Shania will have to make a choice and face the violence of her silence.