"A breathless retelling of the Japanese legend of Momotaro, this is an Asian version of Percy Jackson; adventure fans will be waiting for more."—Kirkus
"With phantasmagorical environments, flying white rats, a fire-breathing bird, a giant, a snow demon, and other creepy things, there is abundant action. This retelling of a Japanese folktale celebrates courage, friendship, and pride of heritage, while featuring unforgettable characters and leaving readers eager for the next installment in this new series."—Booklist
"Though the story of Momotaro is familiar to every Japanese child, Dilloway seamlessly weaves necessary background information into the fast, action-filled plot. Xander, a Japanese American boy, hardly knows the legend himself, so readers learn along with him. Xander's candid and straightforward first-person narration will instantly resonate with middle grade readers, as will his story's themes of self-acceptance and friendship. Yoon's comic-style illustrations evoke Xander's talent for drawing and bring welcome visual interest for reluctant readers. This fast-paced fantasy adventure with a foundation in Japanese culture is perfect for fans of Percy Jackson."—School Library Journal
Praise for Momotaro Xander and the Lost Island of Monsters:
An ALA Notable Children's Book
APALA Asian/Pacific American Award for Literature Honor
A Nene Award Nominee (2019, 2020)
Read More Read Less 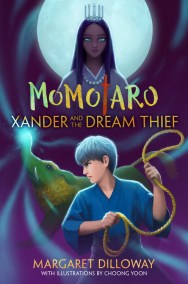